Metrolinx is now planning to expropriate at least six homes in Weston to make way for the Georgetown line expansion, according to Mike Sullivan, the chair of the Weston Community Coalition and a longtime Weston advocate.

Metrolinx had planned a public meeting this week to discuss the design of the cut-and-cover tunnel that will be put through Weston. The meeting announcement does not mention that they are now planning to expropriate houses, although this is surely the most salient aspect of the design. Further, according to Sullivan, Metrolinx has said in the past that no expropriations would be necessary.

The homes that will be destroyed are between Church and King streets, on both sides of the tracks. They are on King, Church, and Fern.

The public wants change. Rob Ford wants to do the changing. But what will this mean for Weston?

My premises, in a nutshell: City services benefit all residents equally, but the rich pay more for them than the poor do. So cutting taxes (or cutting services) helps the rich and hurts the poor. The rich get their money back. Both the rich and poor lose their services.

There are four pillars to Ford’s campaign:

If you are a middle- or upper-class Westonian, Ford’s victory will leave more money in your wallet. But if you’re poor, (and Weston is one of the poorest ridings in the city) the next four years will sting.

Cutting taxes means cutting programs. Ford has been pretty clear that he doesn’t support the Priority Neighbourhood plan that brought millions of dollars into Weston and other poor areas. Weston arts and social-services groups like UrbanArts, Frontlines, and Northwood Neighbourhood Services will likely see cuts.

City staff will also be cut. Ford says that service will remain the same—which is believable only if you think that city staff are indolent, but not so indolent that they will refuse to work harder when they see the people around them disappearing. Perhaps. I’m willing to bet that the poor use city services more that others; certainly they use more employment services, community housing, TTC, and subsidized daycare. Cuts to staff will hurt the working class the most.

Finally, the poor in Weston will not see much tax relief; poor people generally don’t own cars or real estate.  Changes to the vehicle registration tax, the land transfer tax, and property taxes are going to have only indirect effects, if any. Rent increases may not happen as quickly if property taxes do not grow.

But there are good things ahead. There will be more police.  Ford has promised 100 more across the city, and Weston could use some.

Ford has also campaigned on ending ‘the war on cars’ and improving transit with busses. In an inner-burban riding like ours, this could be beneficial in the short run. New bus routes and improved bus service would reach us sooner than an LRT or subway.

More importantly, our re-elected councillor, Frances Nunziata, was one of Ford’s earliest and most vocal supporters. We should expect her to have the mayor’s ear and to hold a position of power. She has said that she would like to be the Speaker in the council. With luck (and focused community pressure) she could use her position for Weston’s advantage.

The city of Toronto is reporting that Frances Nunziata has been elected councillor for Ward 11. She received about two-thirds of the vote.

The race for second, third and fourth places was much closer. Sansone came in second, with 15% of the vote. Marshall received 11%, and Hashised trailed with 8%. 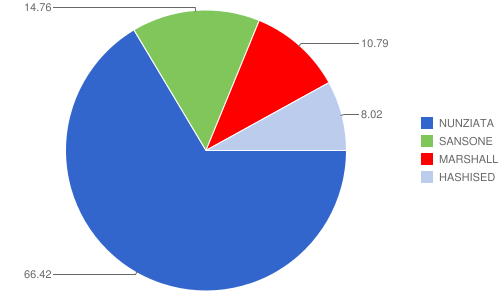 In correspondence with the CTC, they said “Rob Ford has not signed to date.  He claimed
he would but has not. He has not returned calls to meet and sign either.” The Toronto Star also reported, albeit some time ago, that he was the only candidate who hadn’t. Rabble.ca said the same thing more recently.

But an email from the Ford campaign says almost the opposite: “Rob Ford supports the Clean Train Pledge and wrote a letter to Premier McGuinty calling for electrification of the link.”

Now, his email says ‘supports’, not ‘signed’. And I did ask one, straightforward question: “Did you sign the Clean Train Pledge?” The most charitable interpretation then, may be that Ford has been to busy running his campaign to stop by the coalition’s offices to put his name in ink.

But, considering he’s a guy who ordinarily minces few words, you might expect him to just say so.

Take it for what it’s worth (ie nothing), but a random sampling of lawn signs in Pelmo and Weston predicted a Nunziata victory.

Touring through the neighbourhood, I counted the signs.

Rob Ford had 9 signs; Smitherman and Pantalone had one each.

It took ten months, dozens of debates, thousands of lawn signs, and millions of dollars, but it’s all over now. The Toronto municipal election is today.

When you go to vote, you will need to bring either of the following

There are dozens of voting locations in Ward 11. You can find the one nearest you here, or download the complete list here.

NOW Magazine has published its picks for all wards in Toronto. For Ward 11, they say “Anybody but Nunziata”.

Given NOW’s political leanings, this is hardly surprising: the magazine breaks left, and Nunziata leans right. But the text of the article is amusing. The editors just can’t bring themselves to endorse any other candidate. Abdi Hashised doesn’t even get a mention.

Nunziata has been taking up space at City Hall for the better part of the last seven years. … The Labour Council’s endorsing Marshall, but she has little in the way of a definable platform. Sansone looks to be the more qualified, but has a red flag in his resumé, having served as an EA to two of council’s most right-wing voices (Giorgio Mammoliti and Michael Thompson). …